Silence is a very important part of music. And just like sounds or notes played on an instrument, silence can last for different lengths of time. Silence can last as long as a quarter note, and this would be called a quarter note rest. For each note length, there is a corresponding symbol for rest. 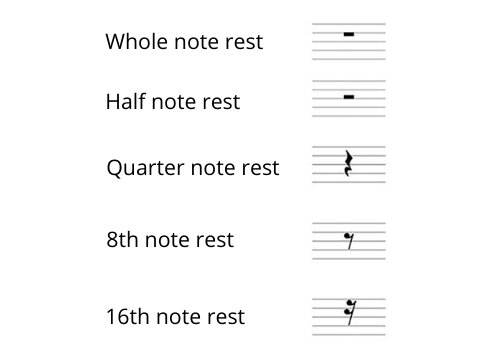 This is a very simple example of using quarter notes and rests in the time signature of four-four. If the rest is on a strong beat (beat one or three), it can be helpful to mentally emphasize it, or physically emphasize it with a silent movement. Try repeating each bar a few times before moving on to the next one (the two little dots beside the bar line are repeat symbols). Don’t lose sight of beat one!

Leaving Out a Quarter Note

Leaving Out an 8th Note

Try each bar separately. Repeat the first bar many times in a row until it’s easy, then move on to the second bar. Then, you could try alternating between the two bars without stopping. You could play these using a metronome, and/or using your foot to tap out the beat (it’s good to try both).


It is a little harder to put rests on the beat, but it’s worth it because it often sounds cool.

Leaving Out a 16th Note

A similar process can be done with 16th notes. First, the easier ones.


A 16th note followed by a 16th rest sounds similar to an 8th note, so the above can be written like this in most cases:

The examples below are harder because of the placement of the 16th note rests.

Now let’s play some exercises that are made almost entirely of rests. We will start with the easier ones. These first four bars have one note placed on the beat.

These four are harder because the note is placed between beats.

These are the hardest ones because they use the 16th note subdivision. These are very useful if you want to play funk music. The 16th notes have to be placed very precisely for them to sound good. Especially in funk music, multiple musicians will be playing the same rhythm, and they have to be perfectly aligned with each other.