So far we have seen seven different scales, each a “mode” of the major scale. These are the most common in western music, but there are more. Technically, there are thousands of potential scales, but not very many of them get used. In this chapter, I will describe some of the more common ones. If you want to learn about more scales, check out musical traditions from other cultures. Classical music in India uses many scales I haven’t listed. Indian scales are called “Raga,” although the word “Raga” has a much deeper meaning than the western word “scale” that I don’t feel qualified to speak on. In Arabic cultures, there are many scales as well, and their word for them is Maqam (or Makam), which I believe is also a much deeper concept than the western “scale.” I recommend doing Melody Ear Training Exercise 1, 3, and 5 using any scale you want to learn to a high level of fluency. 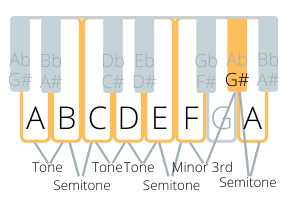 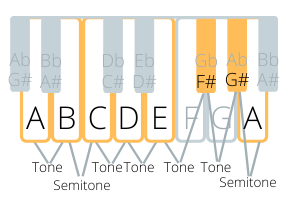 As always, there are seven modes of the melodic minor scale. These modes are worth studying if you want to play modern jazz.

Classical musicians are taught that you are supposed to play this scale differently depending on whether you are ascending or descending it. Ascending, you play the melodic minor as I described, but descending you play the regular minor scale. This is because many classical composers in the past (particularly J.S. Bach) have written pieces that tend to use the raised sixth and seventh note when the melody is going up the scale, and then the lowered sixth and seventh note when the melody is going down the scale. This is a useful concept in the particular genre of European classical music, but in other genres, it doesn’t make much sense.

As the title suggests, this scale is played only using tones. There are only six notes in this scale. The uses for this scale are similar to the diminished scale.