Major and minor scales use a different pattern of tones and semitones. We can think about the minor scale in two different ways. First, we can play all the same notes as a major scale, but start on the sixth note instead.

On the piano, we learned that to play the C major, you start on a C and play all the white notes in ascending order until you get to another C. To play a minor scale, you do the same thing, but start on A - the sixth note of C major. In other words, the A minor scale uses all the white notes and none of the black notes, just like the C major scale does. The difference between these two scales is in which note is emphasized more. In A minor, the “A” is emphasized as the main note, and usually a song in the key of A minor will end on an A, whereas in C major, it will usually end on C. So if you know how to play C major, you can also play A minor. The scale sounds “minor” because of the pattern of tones and semitones (see below). 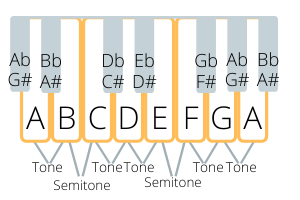 The second way of thinking about the minor scale is to see how it differs from the major scale if you start on the same note. Let’s look at the differences between C major and C minor. To figure out C minor, you start on C, but then use the same pattern of tones and semitones as A minor: tone, semitone, tone, tone, semitone, tone, tone. When you follow this pattern, three notes in C minor are different from C major. The third note, the sixth note, and the seventh note are all lower by one semitone. So E becomes Eb, A becomes Ab, and B becomes Bb. Below is an illustration of C minor. 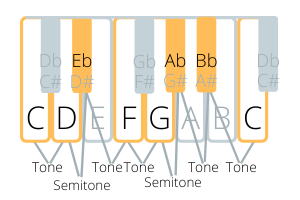 
Previous: Chapter 7
Next: More Modes of the Major Scale