We’ll start with the C major scale because it’s the easiest scale to play on most instruments, especially the piano. The note “C” is the “root” of the scale. To play the C major scale, you start on C, then play D, E, F, G, A, B, and then end on the next C. Try it, to see how it sounds. Sounds familiar, right? It is possible to play a major scale starting on any note, but for now, we will play with C major. A song that uses the notes from the C major scale is said to be in the “key” of C major. Click below to hear the C major scale.

You could make a melody by choosing a random order of notes from the C major scale and playing those notes one after the other. You could experiment with different rhythms for the melody by holding some notes longer and some notes shorter. Your “random” melody would sound fine, but I think you could do better than playing notes at random. Recall from chapter 1 that when you improvise, you’ll sometimes sense that “this is what it’s supposed to sound like next.” Try improvising a melody using the C major scale, but don’t just play random notes. Listen very carefully to the notes you’re playing and see if you can imagine what notes would sound good to you if you played them next. Try to play those notes. If you’re not pleased with the results, that’s okay. Keep reading, and try the ear training exercises in this chapter. They may help you get better at playing the notes you hear in your imagination.

Now, you can play other major scales by starting on a note other than C, but using the same pattern of tones and semitones. Here’s the E major scale: 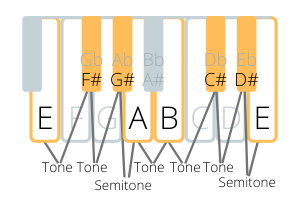 Click below to hear the E major scale. Hear how it sounds the same as the C major scale, but higher?

Depending on which instrument you play, the E major scale might be harder or easier to play than the C major scale. If you want to be fluent on your instrument, I would suggest learning all twelve major scales and practicing them until they are easy (see Ear Training Exercise 3 for how to practice scales). If you are a singer, E major is probably just as easy as C major, and won’t really require much additional practice.

Previous: Chapter 6: What is Melody?
Next: The Best Ear Training Method?