How to Add Chords to a Melody

Imagine a musician singing a song and adding chords on an acoustic guitar. What chords are they playing? How do they pick which chords to play? Why do those chords fit with the melody? You might try to answer this question yourself. Below I’ll explain how this works.

Here is the melody for Twinkle Twinkle Little Star, written in numbers, so you can play it on any major scale: 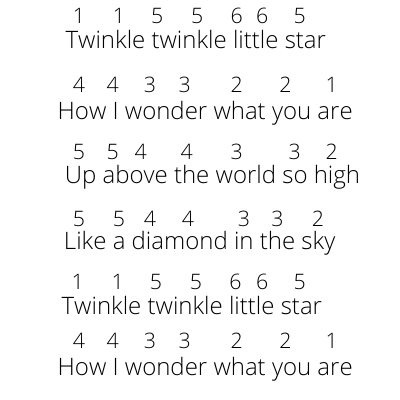 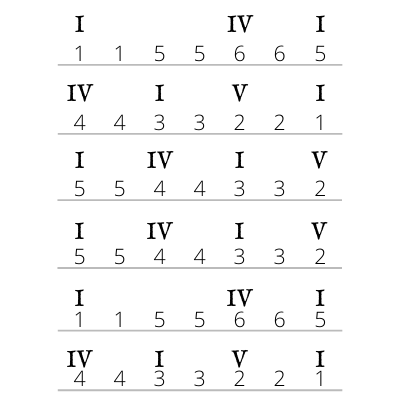 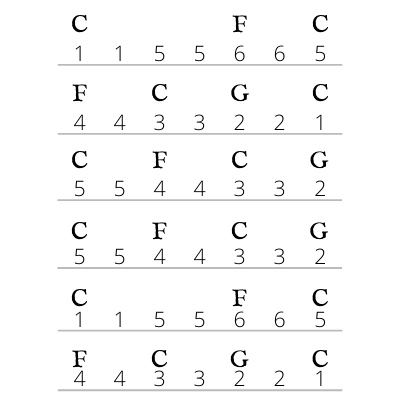 And here is a recording of this on piano:

I believe this will sound familiar to you because this is the simplest way of adding chords to this song. Let’s try some different chords. Remember, for each note in the melody, there are three options for chords that contain that note. Here’s another example of how you might harmonize Twinkle Twinkle Little Star: 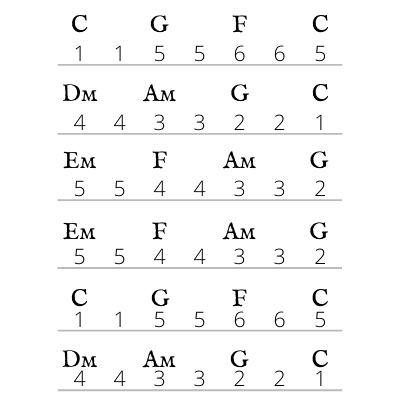 In this accompaniment, I added the minor chords within the major scale: the two-, three-, and six-chord. Again, every time I added a chord, it was when the melody was on one of the three notes in the chord. However, I didn’t just do this randomly, I kept certain things the same as the simpler example. For instance, I started and ended on the one-chord. This is very important for establishing the key of the song. The melody starts and ends on the first note of the scale, establishing that note as “home base,” and making sure people experience the emotional qualities of being in the major scale. The harmony follows this pattern so the listener still has a strong feeling of landing on “home base” at the end of the song. I encourage you to experiment with ending on the four-chord, or the six-chord, to see how that sounds (those chords also have the first note of the scale in them).

It’s usually not as simple as Twinkle Twinkle Little Star, however. In that example, every single note in the melody was part of the underlying chord. Usually, melodies are more complex than this, and the chords only fit with the loudest and longest notes in the melody. There might be some notes in the melody that don’t fit with the underlying chord, but those notes are short enough that you don't notice the clash. For example, in “Mary Had a Little Lamb,” the second syllable of "Mary" is a note that doesn’t fit the chord, but the song quickly goes to the next note, which does fit the chord.

Try adding chords to other melodies, using what you’ve learned so far in this chapter. Nursery rhymes like the ones I listed in Melody Ear Training Exercise 2 are a good place to start, but many other songs will also work. Learn the melody first, and then add chords that you think might fit. If you can, try to play or sing the melody at the same time as playing the chords, or get a friend to play the melody while you play the chords so you can hear how they sound. Try to find chords that sound “right” to you. Eventually, this process can become so easy that you can add chords to a melody in real-time, without practicing the song first. When a spontaneous song breaks out at a party, I enjoy grabbing the nearest instrument and adding chords.

Previous: Introduction to Chapter 12
Next: Harmonizing a Melody