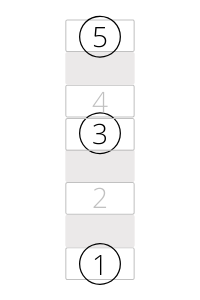 In the picture above, five notes from the major scale are arranged in a vertical line (using numbers instead of note names so it can be applied in any key), and the notes you play to make the major chord are circled. Notice that the space between numbers three and four is smaller than the space between the other numbers. This is because the distance between the third and fourth note of the major scale is a semitone, not a tone. You can learn all twelve major chords by playing the first, third and fifth notes of all twelve major scales.

Previous: Intro to Chapter 11
Next: The Minor Chord