We now know that you can make a major chord using the first, third, and fifth note of a major scale. But, you don’t have to put the first note on the bottom, the third in the middle, and the fifth on top. If you want, you can move the first note up an octave. Then the first note will be on top of the chord. For example, a C chord can be played with an E on the bottom, G in the middle, and C on top. You can arrange these three notes in any way, with each note in any octave, and you still have a C major chord. You could have a low G, then almost two octaves above that you could play an E, and then almost another two octaves above that you could play a C, and that would still be a C major chord. You could also repeat one or more of these notes in different octaves. For example, you could simply play the whole chord in two octaves, so you’d have a chord with six notes in it: C, E, G in a lower octave, and C, E, G in a higher octave. This is also a C major chord.

As you can see, there are many options for playing a C major chord. Each option is sometimes called a “voicing.” Each voicing has slightly different emotional qualities. If you’re interested in arranging music for large groups of instruments, like an orchestra or a jazz big band, you might want to experiment a lot with different voicings for the chords you use. If you are less interested in this depth of study, I would recommend focusing on the three main voicings I’ll explain below. These three voicings are usually called “inversions.”

The image below shows the three inversions of a major chord. The first one is the inversion we learned at the beginning of this chapter, with “one” on the bottom, “three” in the middle, and “five” on top. This is usually called “root position.” The second example uses the same three notes, but the “one” is an octave higher. In the third example, the “one” and the “three” are an octave higher. Knowing these three inversions is particularly useful if you want to harmonize a melody (more on that later), or if you want to have more options for playing chords on an instrument. 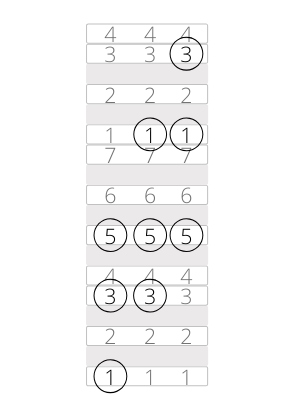 Let’s look at how you might use inversions to play a simple chord progression. In the image below, the first chord is the major chord starting on the first note of the scale, and it is played in root position. The second chord is the chord that starts on the fourth note of the scale, but an inversion is used. In the key of C major, this would be an F major chord. If you were playing this progression on piano, using this inversion means that the finger you are using to play “one” doesn’t have to move, and the fingers you are using to play “three” and “five” both have to move up only one note. This is not only easier to play than moving your whole hand up four notes, but it might sound better to you as well. You’ll see the same benefits on other instruments, and if you are singing these chords with a group of three people. 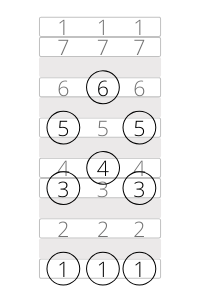 In many musical groups, there is at least one musician playing chords. They would play the chords in whatever inversion is easiest or sounds the best to them. There is also usually a musician playing bass notes. The bass note is the lowest note in the whole musical group at any given time, and there is usually a musician whose job is to play or sing this low note. Most of the time, the bass note is the root of the chord, or the “one,” regardless of which inversion the other musicians in the band are playing. So in the example above, the bass note would start on one, then move to four, then back to one. You could try this by playing the chords in the image above on the piano. Your right hand would play the chords (with the inversion), and your left hand would play the bass notes in a lower octave. This is not a strict rule, and bass players often play something other than the root to create a different sound.